Minorcan Quarter: History and Heritage
The Oldest Wooden School House symbolizes the settlement of St. Augustine from town to city based on the foundation of the strength and determination of colonists to create a community shaped by their traditions, customs, culture and faith. The Minorcans, poor islanders from the Mediterranean, came to Florida in 1768 as indentured servants on a plantation in New Smyrna. After nine grueling, deadly years, working as servants, those who survived found refuge 70 miles to the north, in British St. Augustine. They were allowed to settle on the North end of St. George Street, just inside the City Gate, and remained as the Spanish took the city again, and they remained when Florida joined the United States in 1821.

In November, 1931, nine students gathered together
for the first time in more than half a century. 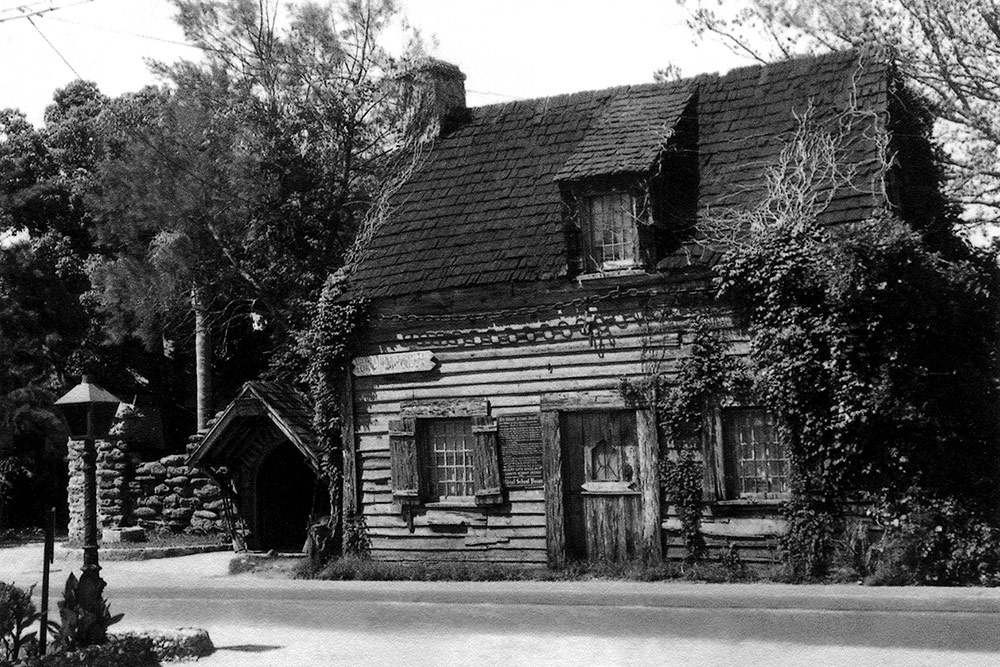 Genopoly Homestead
Property records reflect ownership dating to 1740. Jesse Fish, a land broker representing the property interests of the fleeing Spanish officers and residents after the British took possession of Florida, sold the home to Juan Genopoly on October 1, 1780. A homestead was established and maintained by the Genopoly family for over a century. As a Greek carpenter from Mani, he built a new home at that location (ca 1800-1810) which stands today. The main room on the ground floor was indeed the classroom with the entrance directly on the street. An additional, smaller room was added to the floorplan to serve as the family sitting room with a backdoor for easy access to the kitchen which is a detached building made of wood siding and coquina chimney. The garden area behind the home was used to grow vegetables, fruits, herbs and spices. Water for cooking and drinking and water was pulled from the old well adjacent to the home.

The School House
Juan Genopoly, now living as a free citizen in the British settlement, recognized the importance of learning English. He invited the children from the Minorcan Quarter into his home to teach them reading, writing and arithmetic. Two of the four children born in St. Augustine to Juan Genopoly and his wife also taught at the Old School. Certified notes and letters from students attending during the 1850’s – 1860’s express their memories while attending. Boys and girls attended this little school where it cost 12 1/2 cents per week for the younger students and 25 cents per week for the older students as they were supplied parchment, quill pens and ink to practice their writing. Imagine learning while sitting on a log bench, old chair and sometimes, the floor. The students also spoke of discipline and the consequences of misbehaving. The last class was in 1864. In November, 1931, nine students gathered together for the first time in more than half a century. During the Reunion, the former students arranged the classroom as they remembered so the Genopoly House could open to the public as The Oldest School House.